Note: This is an archived entry. Some links might not still work, but I have tried to ensure scan and video embeds are still in place. If any linked material is unavailable, please let me know and I’ll attempt to find a copy in my personal archives.

New promotional material for Cloud Atlas continues to appear on a near-daily basis; yesterday seven (!) new promotional banners debuted on thew film’s Facebook page and were quickly picked up by pretty much every movie site out there and reposted at varying sizes; I’ve included the largest versions I could find (under the cut) and will post them in chronological order. Hugo Weaving appears in those for the Luisa Rey and Timothy Cavendish storylines as the villainous Bill Smoke and Nurse Noakes, respectively.

Note : The Adam Ewing storyline doesn’t yet have a banner: it features Jim Sturgess as Adam Ewing, Tom Hanks as Henry Goose, David Gyasi as Autua, Bae Doona as Tilda, Hugo Weaving as Rev. Horrox (some who’ve seen the film have confirmed my suspicion that Reverends D’Arnoq and Horrox have been combined into one character), and Jim Broadbent as Capt. Mollyneaux, and is set in the 1850s. And I should give a Slight Spoiler Warning on my banner notes in case anyone wants to go in knowing as little as possible about who plays who… in a way, I envy anyone coming to the film with an innocent eye. Once you get in the “professional fan” business that almost never happens… but our favorite actors nonetheless reward us by still managing to surprise and beguile us in spite of our over-preparation. 😉

The Ghastly Ordeal of Timothy Cavendish is set in the present day and stars Jim Broadbent as the title character and Hugo Weaving as Nurse Noakes. Also featured but not pictured: Hugh Grant as Denholme Cavendish, Tom Hanks as Dermott “Duster” Hoggins, Susan Sarandon as Cavendish’s “lost love” (called “Ursula” in some cast lists, though if this is the case, she’s a very different character from the novel’s Ursula), Ben Whishaw as another of the nursing home denizens, and Alistair Petrie as Felix Finch.

An Orison of Sonmi-451 is set in a futuristic, corporate oligarchic Korea (called Nea So Copros in the novel and Neo Seoul in the film)  and stars Bae Doona as Sonmi- 451– she features in all three banners highlighting this storyline. Jim Sturgess, who plays Hae-Joo Chang (an apparent synthesis of the Chang and Hae-Joo Im characters in the novel) is seen in two banners, and the gluttonous overseer (called Seer Rhee in the novel and played by Hugh Grant in the film) is in the first one. Also featured but not pictured: James D’Arcy as The Archivist, Zhou Xun as Yoona- 939, Zhu Zhu as another Papa Song waitress, Keith David as An Kor Apis, Hugo Weaving as Control, Tom Hanks as the Film Cavendish and Susan Sarandon as Ma Arak Na and Halle Berry as a “male Korean doctor”.

Finally, Sloosha’s Crossin’ An’ Everythin’ After is set about 100 years after the events of the Sonmi storyline and unfolds in a post-apocalyptic, tribal-warfare striven Hawaii. Pictured as Tom Hanks as Zachry and Halle Berry as Meronym. Not pictured: Zhou Xun as Zachry’s wife Rose, Hugo Weaving as Old Georgie, Hugh Grant as the lead cannibal, Susan Sarandon as the Abbess, Jim Sturgess as Zachry’s father Adam, and David Gyasi as “a presidential figure” (possibly Meronym’s contact Duophysite).

Note: some of my casting notes are guesses based on the novel, early reviews and actor interviews as well as the promotional material now available. The film version has substantially changed some characters (including their names and basic physical characteristics) and omitted or synthesized others. For example, Keith David plays a character named “Kupaka Apis” who appears nowhere in the novel but is apparently related to An Kor Apis, a mysterious figure David plays in the Sonmi storyline.  He could be an ancestor of An Kor Apis in just about any storyline (The Adam Ewing plot would be my best guess)– or a descendant in Sloosha’s Crossin’. Neither IMDb nor Wikipedia has a completely correct cast list because both are crowd-sourced and have some omissions or inaccuracies. Ironically, casting notes on the smaller roles at these sites are more likely to be accurate, because they’re posted by the actors or their representation personally.

I understand several of my guesses might be wrong… I’m not trying to be definitive before I’ve seen the film. As many viewers who HAVE seen the film have confirmed, part of the fun is guessing who’s who, and how the novel adheres to or changes the novel.

By the way, the film’s Facebook Page just added an enlarged version of the Toronto Cast Party from September 8:

And thanks again to the James D’Arcy fans for calling this new premiere photo of Hugo to my attention:

Photo: MTime; they have a gallery featuring several other actors from the film as well. This one’s slightly overexposed, but I like it anyhow. 😉

If you still haven’t read the novel, or want to read it again before you see the film (or after) there’s now an Enhanced E-Book “movie tie-in edition” available for pre-order (it’s officially released October 9) featuring heretofore unseen film footage and interviews with the actors, “including Tom Hanks, Halle Berry, Hugh Grant, Hugo Weaving and James D’Arcy”.  It’s in Kindle format, but you can download free Kindle software from Amazon for computer viewing if you have a rival e-reader or, like me, bought the old school Dead Tree Format. (I’ll probably buy the enhanced version too, but am eternally grateful the paperback was on hand last October during the 12-day power outage…  and it’ll be equally handy if, like some Cloud Atlas characters, we eventually find ourselves in a post-apocalyptic, post-technological state.) 😉

If you want to do something nice for your fellow fans (and people who, like the James D’Arcy faithful, have provided invaluable research assistance in following this film’s progress) you can buy the Kindle Enhanced edition via Jim Sturgess Online for the regular (and very reasonable) Amazon price. The Orison Edition is not yet available, though it may be bundled with the inevitable Blu-Ray. 😉 And speaking of Jim Sturgess, he gave an interesting interview to Vulture (as Hugo Weaving did earlier this month) discussing the challenges of playing six characters in Cloud Atlas. He also (one hopes) provides the final word on the cross-racial casting controversy: if Bae Doona’s mother was OK with Stugess (or other actors, including Hugo Weaving, James D’Arcy, Hugh Grant and Susan Sarandon) playing Asian characters, you should be too.

Tom Clift, Moviedex: “Cloud Atlas is a big, bold, beautiful work of staggering ambition and artistry… The casts’ work is excellent bar none, although quite frankly, so unrecognisable does the makeup sometimes render them that the end credit revelation as to who played who in what segment is more jaw-dropping than the actual performances… Astoundingly, out of six stories over vastly different scale and tone, not one feels unnecessary or boring. Indeed, masterful editing – along with a beautiful score that’s as multifaceted as the movie it’s accompanying – provides the film with a wonderful ebb and flow… Yet no matter the profundity, the best thing about Cloud Atlas is that it always maintains a sense of intimacy…. To try and write conclusively on Cloud Atlas after just one viewing feels like something of a fruitless endeavour. This is an important film; a film that will deservedly be watched, rewatched, discussed and studied for many generations to come. It is stained glass cinema: shards of disparate splendour made breathtakingly whole.”

Moira Romano, Myetvmedia: “Visually the movie is superb employing a number of cinematic techniques to transport the viewer across time. The story requires the full attention of the viewer. There are no simple plot lines. Each character is on a quest and has a mission. How they accomplish this will have impacts that will influence generations to come…. The story illustrates the significance of keeping a record of our human journeys and the passing down of knowledge that we as a civilization can learn from. The contribution of each character is very powerful as the tale is variously narrated, portrayed through dream sequences, played out in the present, seen through flashbacks and in futuristic worlds….Cloud Atlas is an extraordinary movie with an inspiring, thoughtful message that will stay with the viewer well after you leave the theatre. ”

Myetvmedia also posted a new YouTube clip featuring footage of the directors and cast intro from the Cloud Atlas premiere at the Toronto International Film Festival, filmed from a viewpoint slightly closer to the stage than the official version:

In non-Cloud Atlas Hugo Weaving news, Last Ride will finally debut on US DVD next month (October 16 to be precise) and is currently available for pre-order; alas, no US Blu-Ray has yet been announced. (There is a German version, the only Blu-Ray currently available, but I have no idea how enhanced it is, or what its extra features might be; since there’s no Australian Blu-Ray and director Glendyn Ivins hasn’t mentioned that version, I suspect it’s the Australian DVD edition reformatted.) If you’re a Netflix subscriber, you might have noticed it’s moved from your Saved Queue to your active queue.  I recently found another glowing review in The New Republic for the film’s US release this past summer… here’s an excerpt:

Stanley Kauffmann, The New Republic: “The Australian outback, the setting for most of Last Ride, an extraordinary film for which the locale is a quiet, almost secret catalyst. Directed by Glendyn Ivin, with a screenplay derived by Mac Gudgeon from a novel by Denise Young, it needs only two major characters to create a picture that begins as a bare-knuckled adventure and becomes a folk tale. At the last we are almost gratifyingly ashamed for not having seen from the first the quasi-myth that it becomes….Kev is a man in his thirties, a rough character not untouched by the law, who has a ten-year-old son named Chook. The bulk of the film is Kev’s flight from the law and to a possible new life accompanied by his son… But an almost lofty effect in Ivin’s view of the proceedings, plus his sense of the awesome environment as a silent character, alerts us for surprise….This deepened view extends backward to touch everything we have seen before. And that view is enriched by the very end of the picture. Last Ride is then seen as an attempt to render with words and pictures the sad lyricism of a country ballad. Ivin, with his loving direction, lets this gradually come through to us. Hugo Weaving, a leading Australian actor, makes Kev exceptionally sound along every shade of his register. And once again a breathtaking performance by a child. Tom Russell is Chook most endearingly.”

I bet Hugo would be thrilled to hear that the reviewer perceives Kev, not one of his more manicured characters, to be “in his thirties”. 😉 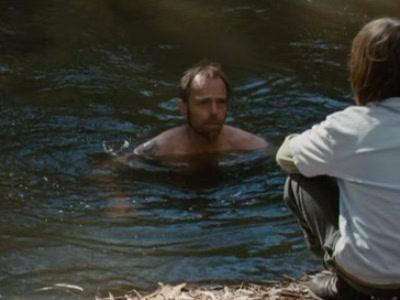 ‘I promise not to try and drown you this time, son” 😉
Hugo Weaving and Tom Russell in Last Ride

Breaking News: There’s apparently been a surprise preview screening of Cloud Atlas at Fantastic Fest in Austin, TX with the directors in attendance. More news on this as it becomes available.