I was hoping to have coverage of The Turning’s Sydney premiere (which took place yesterday) by this point, but there’s been disappointingly little online coverage of the event so far. I will share any news/photos that I find when/if they appear, but in the meantime some even more exciting news has emerged in the past few hours: Sydney Theatre Company has announced its 2014 season, and Hugo Weaving is scheduled to tackle the title role in Shakespeare’s Macbeth for the first time in his career, in a production slated for a generous 21 July – 27 September run next year. Alas, there’s no word whether this (or Waiting for Godot, Hugo’s late 2013 STC production) will tour. I keep hoping STC will one day start filming or simulcasting productions, because it’s kind of gutting to miss what might well be Hugo’s most challenging work just because I happen to be in the wrong country. 😉

Remember a few posts ago when I said there was a rumor Hugo was filming something with Bryan Brown in the Sydney area? I have a feeling they might have been working on the STC brochure, as both actors are featured in separate productions. If that isn’t enough talent for one season, Richard Roxburgh will also appear in a new production of Cyrano de Bergerac. So once again I’m seething with envy at anyone in a position to get season tickets for next year. Here’s STC’s trailer for next year’s high-wattage lineup:

(Note: STC has changed their brochure embed script to a format LJ doesn’t allow embeds; I’ve tried a work-around, but if you don’t see the brochure above, you can read it here. I’ll also embed snapshots of the pages featuring Hugo’s production as soon as I can prepare them.)

Andrew Upton, STC’s Artistic Director, gave ABC Online an interview about the new season, and said this of Hugo’s participation: “Every year I talked to Hugo about what he’s up for doing, what interests him and that kind of led to Macbeth…I think it will be a beautiful thing to see him playing that role, and it’s a great time in his career to be grappling with that role.” STC will also experiment with the staging of the piece, in effect having the audience and actors switch places:  ““…so the audience will be sitting on the stage, looking back into the auditorium where the action will play out. ‘I really am interested in any audience having a new experience of a theatre like that,” Upton said. ‘It is quite a defined space, so the opportunity to turn that around and turn it on its ear is a great opportunity for our loyal audiences who know the space well and will now see it completely differently, but it’s also just a great opportunity for the theatre.’ ” There’s also a summary of STC’s 2014 season in The Daily Telegraph.

So far, all I’ve found concerning the Turning premiere are a couple of new reviews:

James Rudd, Glam Adelaide: “The film is made up of 18 self-contained stories of Australian life, lovingly crafted by 18 different directors. Each director brings something distinctive to the mix, ensuring no two chapters are alike. Reoccurring characters and beautiful Australian scenery tie all the pieces together into an interwoven whole that is satisfyingly complex. These connections are often so subtle that it is easy to miss them, but are heartbreaking when they are revealed…

Featuring stars such as Hugo Weaving, Cate Blanchett and directed by emerging and established Australian artists such as Stephen Page, Anthony Lucas and Marieka Walsh, The Turning is a truly Australian endeavour. The directors obviously understand the country very well and capture the essence of both rural and urban settings perfectly. The casting, for the most part, was also pretty spot-on…

While The Turning is big, it is also quiet. The rarity of dialogue or any sounds whatsoever makes the vastness seem all the more vast and the subtle expressions of the actors more significant. The Turning evokes more emotions with a single shot than many films do with entire speeches. The film’s minimalism draws us into a hypnotic trance and magnifies the simplest actions until they become almost horrifying. The film can go from charming to disturbing with ease, which I believe is a testament to both Winton and the directors.”

Tim Kroenert, Eureka Street: “The Turning is long, but patience bears fruit. The recasting of characters from one story to the next — notably, the shift from Indigenous to Anglo-Australian actors and back — may be disorientating, but it is also a neat way of blurring delineations of Australian identity. Some of the connections between stories are obvious — details such as a young girl’s missing ring finger, or another girl’s facial birthmark, are referenced in multiple stores. But the subtler, fundamental connections will be most resonant if they arise organically through the accumulation of thematic threads — of love, loss, family, friendship and identity — that are contained within each lyrical tidbit.”

Cathy, Creative Drinks: “The Turning mixed great established actors like Cate Blanchett, Rose Byrne and Hugo Weaving with yet unheard of up-and-coming actors… The acting in each story was excellent and did a great job of transporting you from your cinema seat into the various worlds presented in The Turning….

Overall The Turning is an interesting film but would definitely appeal to the more seasoned and arty film-watcher than your typical blockbuster moviegoer.”

Aaron Pedersen, Ivan Sen and Ryan Kwanten have continued doing publicity for Mystery Road at the Toronto Film Festival, where all three screenings of the film have sold out. Response continues to be largely positive. Here’s a brief interview Pedersen gave the Toronto Star/Red Carpet Diary:

In addition to prominent showcases at the London Film Festival and Busan Film Festival next month, Mystery Road will be the opening night presentation at the ImagiNATIVE Film and Media Arts festival in Toronto on October 16, showing in the same theatre where it premiered last week at TIFF. More details at Broadway World Movies.

The Turning and Mystery Road are also both eligible for Best Picture at next year’s AACTA Awards, two of fifteen films from which five eventual nominees will be chosen this fall.

While doing press for Insidious Part 2, Leigh Whannell has been dropping a few hints about The Mule, which apparently wrapped filming recently. Though we weren’t given any new details on Hugo’s character, these interviews suggest strongly that he isn’t playing the title character, who’ll probably be played by Whannell himself. Here are the pertinent quotes from both interviews:

Collider: “The Mule is a film that I just wrapped shooting a few weeks ago in Australia.  We shot a little in Bangkok as well.  This is a film I wrote with Angus Sampson and we’ve been writing it over the last few years.  It’s a crime thriller/black comedy about a drug mule who gets caught at Melbourne airport in 1983.  So technology for catching drug mules isn’t like it is today, it’s in its very early stages.  The police take him in and while he’s custody this guy, who’s a pretty naïve guy, he’s not an experienced drug mule, he’s like this hapless guy, he decides he’s going to deal with this situation by keeping the drugs in his stomach for as long as he can – basically not going to the toilet.  And so the tickling clock of the film becomes when is this guy going to let these drugs out?  [Laughs] How long can he hold on?  Literally and figuratively.  And the longer it goes on, this standoff, the more everyone around him is kind of dragged into it – his family, the criminals who own the drugs in his stomach, the police.  I’m really excited about it.”

Den of Geek: ” I just did another film with him in Australia called The Mule, which is a film Angus and I wrote, and we shot it in Australia. We have Hugo Weaving, and it’s very different. It’s kind of a drama, almost Fargo-esque crime thriller about a drug mule. It was really interesting to act in that film, because it was so different from doing Specs and Tucker. I really felt like an actor, I was working out how this character walked and talked and smoked. I do have fun playing Specs [in the Insidious films], but weirdly enough, shooting this film in Australia has really made me want to throw myself into acting more and see where that takes me.”

I don’t recall any of the Coen brothers’ films hinging on medically questionable constipation plots. 😉 Nor am I really a fan of the Saw and Insidious films, but Whannell is going out of his way to describe this movie as something completely different from those, so I’m trying to hope for the best. Though it’s more than a bit frustrating to think that international audiences get this while Australians (and those with lavish travel budgets) get Macbeth. But I can’t really fault any of the feature film or play choices Hugo has made in the past couple of years– it’s an intriguing, diverse mix. And I’d rather that Hugo star in plays I can’t see than movies (like Transformers and Captain America) that I WON’T see. 😉

BREAKING NEWS: We’ve got pics of the STC’s 2014 Season Launch!

Hugo Weaving and Andrew Upton   Photo: Marianna Massey/Getty Images via Zimbio (plus next 2)

Here are the STC 2014 Season brochure pages for Macbeth: 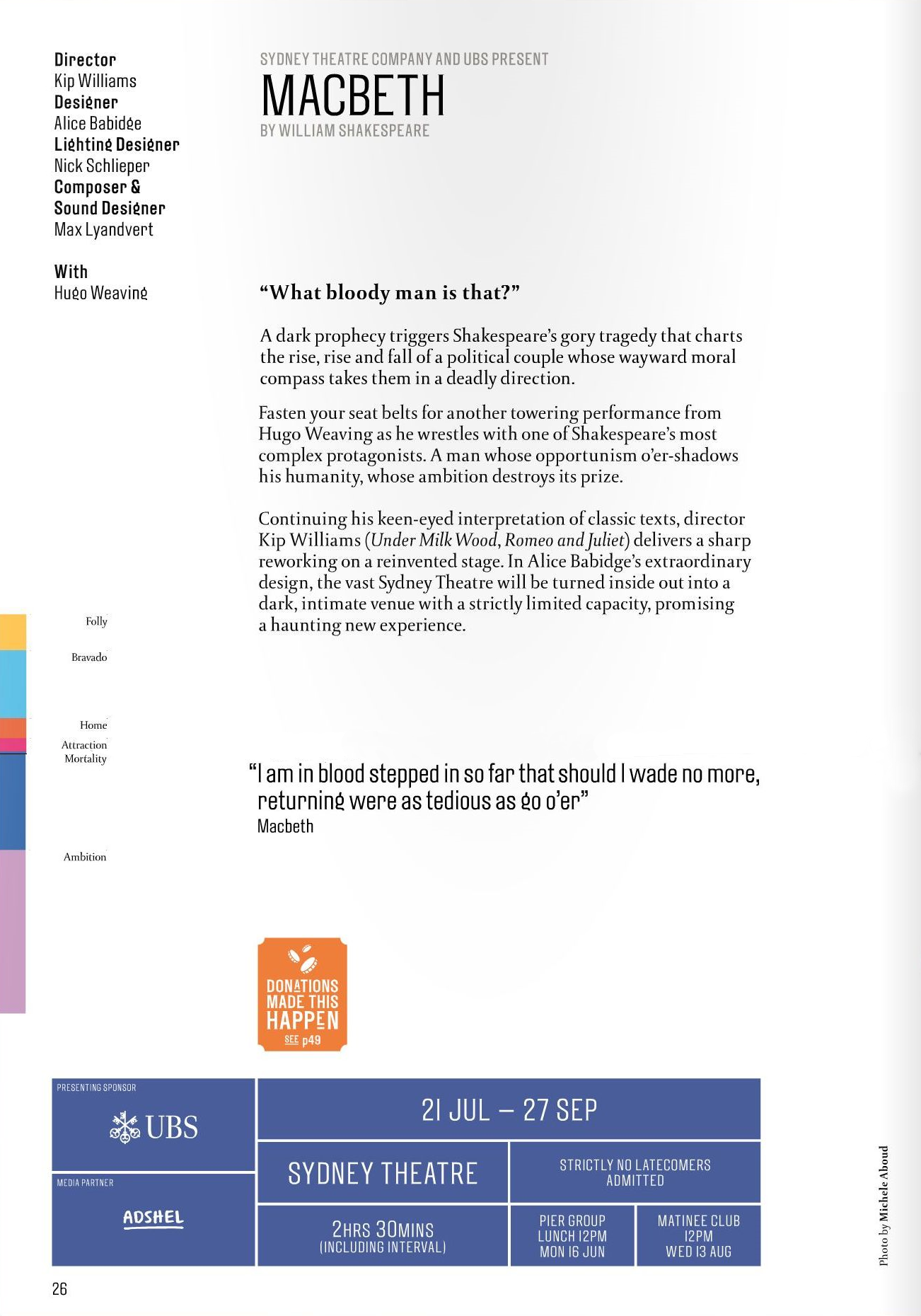 Trivia: While Hugo hasn’t played Macbeth before, he has costarred in the play, portraying the symbolically-named messenger Seyton in a 1980s production. And of course he quoted some lines from the play in the scene in V for Vendetta where V rescues Evey from the Fingermen. 😉

The accompanying article featured Andrew Upton’s perspective on the play and the unique staging STC plans; here’s the text:

“Kip Williams takes a giant step up from Under Milk Wood and Romeo and Juliet, to take on not only Shakespeare, and not only with Hugo Weaving in the lead, but in the Sydney Theatre.
This bold production will seat 300-or-so audience members on risers on the stage, and the actors in the auditorium. Williams had the idea during a stint as assistant director to Andrew Upton on The White Guard, and the two took the conversation up again earlier this year, re-visiting the theatre.
“The proscenium theatre is an old-fashioned thing,” says Upton. “There’s a sort of courtly shape to the theatre, a sense of hierarchy – the masses versus the upper class. And then the empty seats almost give a sense of this graveyard, creepy – a sense of things coming out of the dark at you.”
Nick Schlieper and Alice Babidge (behind the visually ravishing staging of The Maids) will be upping the creepiness factor with lighting and set design, respectively.
Macbeth is Upton’s favourite Shakespeare – “for the rather banal reason that I studied in the most depth, because it was an HSC text,” he laughs.
Macbeth is part of the Sydney Theatre Company 2014 season; season tickets on sale September 17; single tickets on sale December 2 for first half of year; February for second half of year.”