Sydney Theatre Company’s production of Endgame, starring Hugo Weaving, Tom Budge, Sarah Peirse and Bruce Spence, opens later today in Sydney. While we await the first reviews and production photos, here are the latest preview articles and other promos released in the past few days.

The most interesting of these is The Daily Telegraph’s interview with Weaving, Peirse and Spence. The online and print versions of the piece, written by Chris Hook, both feature the same text and a new photo by Bob Barker (above); the print version (from Best Weekend’s 27 March edition, scans below) adds a nice cover photo of the three and a few additional rehearsal pics by Lisa Tomasetti. Not a lengthy interview but it features perceptive comments and stays pleasingly on-topic. 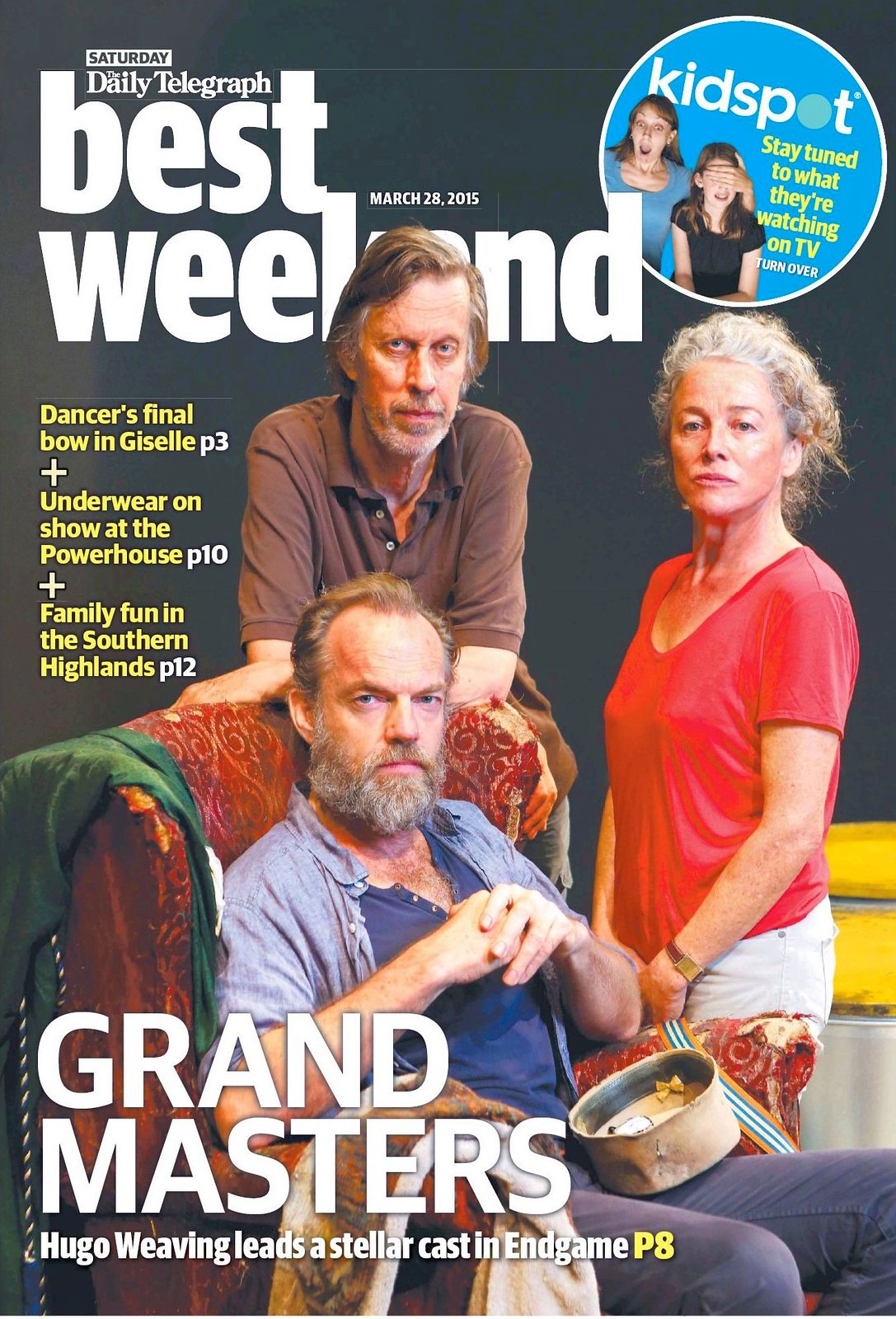 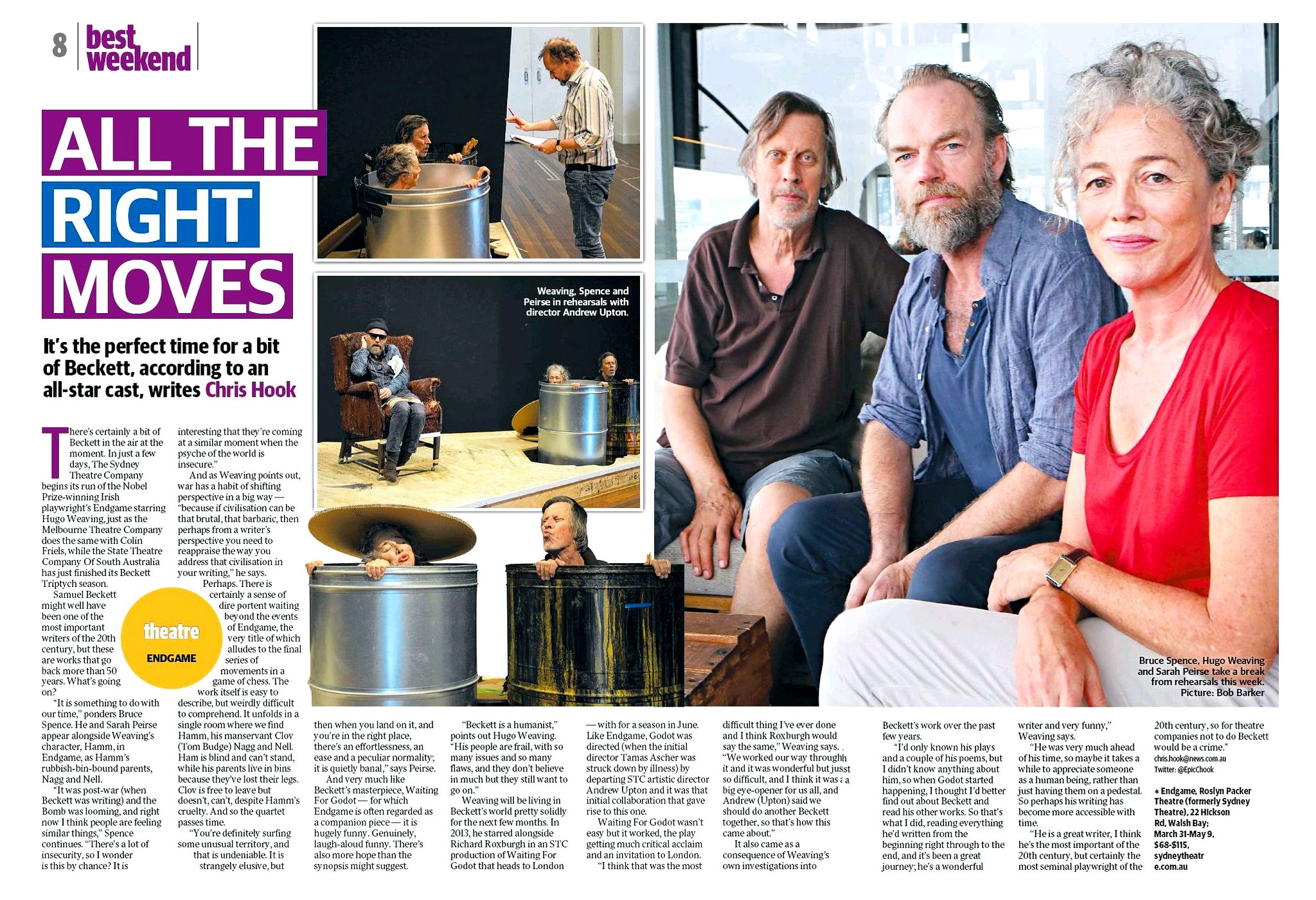 Fans of last year’s Drawing Godot exhibit, featuring Nicholas Harding’s sketches, etchings and watercolors of STC’s Waiting For Godot (2013) will be happy to note that Harding (a longtime friend of Hugo’s) has returned to perform a similar task for the current Beckett play. STCs Facebook page recently featured a selection of the new sketches, and more will appear in the programme sold at performances. Those not lucky enough to make it to Sydney can read a few highlights of the programme content (including rehearsal photos, biographical notes and commentary on the play’s themes and characters) in this STC Magazine feature. Here are a few of Harding’s drawings featuring Hugo Weaving as Hamm:

Andrew Upton spoke to The Big Smoke about his take on the play and his role directing the new production. Rebecca Gibney briefly mentions the film in a recent TV interview. And Sarah Peirse was interviewed by themusic.com.au about her role as Nell, and why she’s luckier than Bruce Spence as far as trying to squeeze into those trash bins goes. 😉 Gay News Network posted a detailed preview of the production.

As Jocelyn Moorhouse’s new film nears the end of post-production, a handful of preview screenings have been held or are planned at various locations in Australia. There was brief but enthusiastic commentary about one such screening in Melbourne on IMDb and Twitter, but not a lot of information about the film.

New production photos have appeared on Twitter courtesy of Monty Fan, including images of the sets and costumes, and this lovely cast and crew photo featuring Hugo Weaving and director Moorhouse:

Though no news of an official US release has yet surfaced, Healing did make a splash in its recent Sedona Film Festival screening, winning the Best Foreign Film prize. More details at the festival’s webpage.

In Other Hugo Weaving News

Hugo was recently spotted and photographed at a Sydney Art Month event at The National Arts School Gallery, behind a Red Sturts Desert Pea. 😉

The Guardian‘s Luke Buckmaster posted a tribute to one of Hugo Weaving’s most gripping (and “criminally underseen”) films: The Interview, directed by Craig Monahan (who subsequently reteamed with Hugo on Peaches and Healing.) This remains among Hugo’s top five performances by most serious fans’ estimations; those who still only know his career from its occasional franchise excursions would find it a revelation if they checked it out.

Mystery Road continues to draw positive attention via Netflix and BBC streaming; you can read new reviews at Everything Noir and Cleveland Movie Blog.